Marie-Louise Monnet, aware of the major role of lay people in evangelizing society, created the ACI (Catholic Action for Independent Milieus) in 1941.

A woman of her time
Born into a family of the Catholic bourgeoisie, Marie-Louise Monnet was born in 1902 in Cognac. She is the sister of Jean Monnet, one of the founding fathers of Europe.

A triggering event: a vocation is born
In 1931, on retreat in Lourdes, Marie-Louise, while attending a celebration of the JOC (Jeunesse Ouvrière Chrétienne) became aware that “the immediate apostles of the workers will be workers; the apostles of the industrial and commercial world will be industrialists and traders. »

Foundations at the service of the lay apostolate
This led to the birth of the JICF (Youth Independent Christian Women), then the elders of the JICF which in 1941 became the ACI (Catholic Action of Independent Milieus), a movement of men and women. The dynamism created led him to found in 1964 the MIAMSI, International Movement of Apostolate of Independent Social Milieus.

The role of ML Monnet led Paul VI to appoint her as the first lay female auditor of the Second Vatican Council.

She retired from all responsibility in September 1986 and died on November 2, 1988, a week before her brother Jean's ashes were transferred to the Pantheon

To know more about Marie-Louise Monnet.

The key dates of the foundation
1931 : Marie Louise Monnet goes on a pilgrimage to Lourdes. Meeting with the Christian Worker Youth (see with Amour et passion p. 11 to 15.)
1935 : The Independent Christian Women's Youth is officially recognized by the French Catholic Action.
1938 : First issue of the “National Mail of the Seniors of the Independent Christian Women’s Youth”
1939 : Women's Catholic Action in independent circles is created.
1941 : The assembly of cardinals and archbishops approves the ACI as a national movement with two branches: male and female.
1964 : Meeting of the constituent assembly of MIAMSI in Rome
The main events
1973: Grenoble, the federal debate

The bet of the encounter was the possibility of living a unity, from groups of people whose status, age, sex, political and philosophical options, their conceptions of religion place in competition and divide.

During this meeting, a better consideration of the evolutions of society was made, leading to an in-depth reflection on the federal debate.

Lourdes, "forum of hope", 12-13 and 14 November 1993 "at the heart of the tensions which agitate us, to be a force of hope"
To continue to offer places of exchange where men and women approach the concrete aspects of their life, wonder about the meaning of what they build with others.

Let us be true witnesses of hope.

"La Pommeraye", 9, 10 and 11 November 2002 National weekend for young adults (under 40). 200 people, 90 children.
Initiative born from the will of young adults in ACI having lived the meeting of Fiuggi in 2000 (Assembly of Miamsi: eradicating poverty...) wishing to propose to other young people to live the experience of sharing, testimonies, time user-friendly...

Valpré session, weekend of May 8, 2003 “Apostles together, from source to mission”

For three days, 225 leaders of the movement, proposed to seek "what we serve in this world. Try to better express the faith that drives us to exercise our responsibilities. Explore what lay people, deacons and priests we are called, different , to serve together. What are the new ways of exercising our mission together".

2,500 people met on 11, 12 and 13 November 2005 at the Grande Halle d'Auvergne in Clermont-Ferrand around the theme "In a changing world, let us discern what holds promise for the future" Isaiah (43, 19) enlightened , guided and enriched the meeting: “Here I am to do something new, it is already budding. Don't you see it? »
2005 Experimentation of a diversified chaplaincy.

The ACI decides to experiment with a diversified chaplaincy made up of priests, deacons, religious and laity. 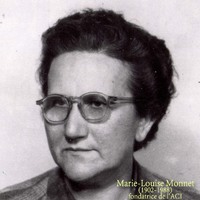