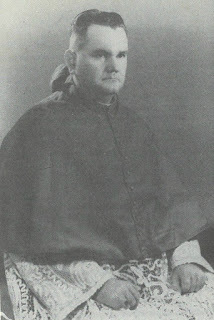 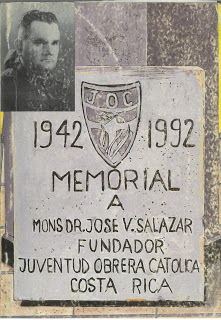 Monsignor José Vicente Salazar Arias (1913-1962), was the founder of the JOC in Costa Rica.

José Vicente Salazar Arias was born in San José, on April 8, 1913. He was the first of three children to have José Joaquín Salazar Peraza and Melchora Arias Porras.

As a young woman, his mother wanted to join the Sisters of Sion as a religious, and even traveled to France for such a purpose, but for health reasons she returned to Costa Rica and eventually married. His paternal grandfather, Dionisio Salazar, was a cabinetmaker and taught the trade to his son, José Vicente Aguilar Peraza who was also a priest. The confessionals of the metropolitan cathedral of San José were made by Fr Jose Vicente Salazar Peraza.

Like his uncle and namesake, José Vicente Salazar Arias, he opted for the priesthood. Since his face was round and red, in the Seminary he was given the nickname "Manzanita" which, many years later and for the same reasons, was also given to Monsignor Román Arrieta Villalobos.

As the young seminarian excelled in his studies, Archbishop Rafael Ottón Castro sent him to Europe in 1938 to obtain a doctorate. In Belgium, his first stop in the old continent, José Vicente Salazar met the person who would be his model and mentor, Joseph Cardijn.

World War II broke out the year after his arrival in Europe, and although he successfully completed his doctorate, he suffered hardship over the conflict. Five young Costa Rican students were trapped in Italy by the war: Father Salazar, Otto Jiménez Quirós, who studied architecture, Carmelo Calvosa Chacón, Fernando Escalante Pradilla and Carlos Collado Martínez, who studied medicine. Except Carlos Collado Martínez, who was murdered by the Nazis and whose memory was erected in front of the metal building, the other students managed to return to the country, but on their return they were so weak that even their own relatives found it difficult to recognize them.

Fr Salazar returned in 1942 and had the opportunity to accompany his parents in their last days. Both died, with a week of difference, in 1943.

Fr Salazar worked for only a short time in the parish of Heredia. In Europe, in addition to learning to speak Italian, French and German, he studied in depth the Social Doctrine of the Church and wanted to devote his energies to the cultural and intellectual promotion of the young workers.

On November 27, 1942, the same year that he returned to his homeland, Fr Salazar founded the Costa Rican JOC, which soon attracted numerous members. As a tribune and means of communication, he published a newspaper, El luchador , which circulated without interruption every Saturday, from May 29, 1943, to June 28, 1959. The weekly identified itself as "Organ of combat of the Catholic workers organizations" and had as its purpose "the cultural, religious, moral, economic and social elevation of the workers of Costa Rica".

In the book appear several articles of tone on and vehement, with calls to action rather than reflection. The issues ranged from the aftermath of divorce to the inconvenience of state contracts with private power companies. The proposals were to some degree socialist, but the position was clearly anti-Bolshevik. Capitalism and the market were criticized as much as Marxism and the Soviet Union. Despite the incendiary content of his newspaper, Fr Salazar maintained that the JOC was not, and would never be, a political movement.

On September 15, 1943, in the parade about the promulgation of the Social Guarantees, the youth of the JOC paraded separately from the workers affiliated to the trade union confederation Rerum Novarum, directed by Fr Benjamín Núñez, which had the support of Archbishop Sanabria.

Although both had a certain courtesy in their dealings, Fr Salazar's differences with Archbishop Sanabria were deep and frequent. Salazar disagreed with the bishop's decision to withdraw the Pauline Fathers from the Seminary and instead appoint local priests with less intellectual preparation as trainers. He was also concerned about Sanabria's close relationship with communist leader Manuel Mora Valverde . Fr Salazar maintained correspondence with Monsignor Giovanni Battista Montini (the future Pope Paul VI ) whom he had met in Rome in his student days and is said to have written to Rome (it is unknown whether Montini or someone of lesser rank) accusing him o f being a communist bishop.

Among other activities, Fr Salazar founded La Casa de la Juventud, a hostel for students and young workers, the San Pío X Vocational Institute and the Secular Institute Opus Mariae. He also created a Catholic organization of Boy Scouts to, according to him, counteract the Masonic influence of the organization. At that time it was not clear whether Sir Robert Baden-Powell, the founder of the Boy Scouts, was a Mason, but after a dispute between Father Salazar and the writer Roberto Brenes Mesén , Archbishop Sanabria ordered him to end his involvement with scouting.

In spite of the tense situation he had with Fr Salazar, Archbishop Sanabria warmly welcomed the visit made by Cardijn to Costa Rica and participated, together with President Teodoro Picado, in the organization's national congress.

In 1948, without compromising the members of the JOC in the declaration, Fr Salazar clearly and openly expressed his support for Don José Figueres Ferrer .

Once installed the Founding Board of the Second Republic, presided over by Don Pepe, Fr Salazar participated in a failed initiative of the Junta to request the Holy See to create more dioceses in Costa Rica. Some saw in this action an attempt to remove Sanabria, while others considered that Salazar, deep down, did nothing more than to procure his own appointment like bishop.

After the death of Archbishop Sanabria, his successor, Archbishop Rubén Odio had, at least initially, a good relationship with Fr Salazar. He appointed him as a canon and gave full support to his initiatives.

However, after an incident at the JOC world congress in Rome, the archbishop dismissed Fr Salazar from his position and replaced him with Francisco Herrera Mora. At the time of the change, the Costa Rican JOC was practically dissolved.

Fr Salazar was isolated in his Youth House, adjacent to the temple, dedicated to the Miraculous Medal, which he had built in 20th Street. When someone visited him he used to respond that he was at ease in his "little caracolito".

Archbishop Odio died on August 21, 1959, and more than eight months passed before his successor was announced. During this period, it was thought that there were possibilities that Monsignor Salazar could be appointed bishop. He was young and had shown himself to be energetic, had a doctorate, spoke several languages ​​and, despite his conflicts with bishops, he had good relations with the clergy, his conduct was impeccable and his attachment to the doctrine indisputable.

He also had powerful friendships, among them including Cardinal Montini, with whom he corresponded, and Cardinal Carlo Chiarlo, who had been Apostolic Nuncio in Costa Rica and held him in high esteem.

But all the illusions of the sympathizers of Fr Salazar came down on May 7, 1960, when the appointment of Archbishop Carlos Humberto Rodríguez Quirós was announced.

If Fr Salazar's relations were tense with Sanabria and Odio, with Monsignor Rodríguez Quirós they reached points of true confrontation, since they did not share points of view in almost any matter. Much more energetic and much less patient than his predecessors, Archbishop Rodríguez Quirós was not willing to tolerate a priest who acted freely as if there was no authority over him and had him on a short rein and under strict supervision.

In 1961, Fr Salazar celebrated his twenty-five years of priesthood with a luncheon to which he invited three hundred poor people, including beggars and indigents, whom he attended splendidly and dismissed with gifts. The following year he died at the age of forty-nine.

Shortly before his death, he traveled to Italy and visited Padre Pio de Pieltrecina. The book contains the testimony of someone who says that Padre Pio approached Msgr Salazar and said, "You will never be a bishop. Return to your land, because your time is near."