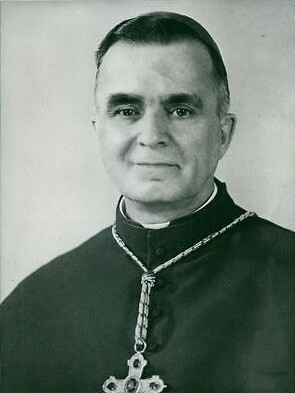 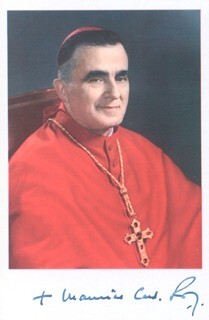 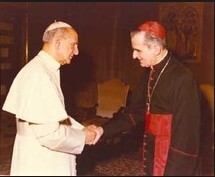 Maurice Roy was a chaplain to the JOC as well as a cousin of Canadian JOC founder, Henri Roy. As a bishop and cardinal, he supported Cardijn at Vatican II and later became president of the Pontifical Councils of the Laity and Justice and Peace.

Son of a judge and academic, Maurice Roy was born on 25 January 1905, he was ordained a priest for the Archdiocese of Quebec on 12 June 1927.

After studying theology at the University of Laval, he went to Rome to continue his studies at the Angelicum in 1927.

In 1929-30, he also studied at the Catholic Institute of Paris. It is likely while in Paris that he first became familiar with the JOC and he may have heard Cardijn give a famous speech to seminary students in 1929.

Nevertheless, it was his cousin, Henri Roy omi, who introduced the JOC into Canada.

During World War II, he was a chaplain to the Canadian Army and he was stationed in Belgium during that period and he may have once again have come into contact with Cardijn and the JOC.

On 22 February 1946, he was appointed bishop of Trois Rivières.

On 2 June 1947, he was appointed archbishop of Quebec.

During 1947, he also hosted an international meeting of JOC chaplains in Trois Rivières prior to the JOC International Congress in Montreal the same year.

As a bishop he was a Council Father at Vatican II and was a member of the joint commission responsible for the drafting of Gaudium et Spes.

Pope Paul VI made him a cardinal on 22 February 1965, the same day as Cardijn became a cardinal.

Six years later, on 11 January 1973, he was appointed as president of the Pontifical Committee for the family.

In 1971, Pope Paul VI addressed a letter to him entitled Octogesima Adveniens, marking the 80th anniversary of the encyclical Rerum Novarum.

Historians credit Cardinal Roy with having himself drafted this letter which is clearly set out in the form of a see judge act:

Part III: Christians face to face with these new problems 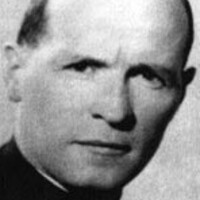