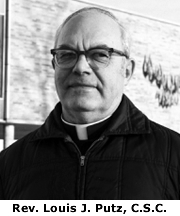 Louis Putz was a German-born American CSC father, who learned the jocist method in France, and was a pioneer chaplain for the YCW, YCS and CFM movements in the USA.

Born in Germany in 1909, Ludwig Josef Putz was sent by his relatives to study in the USA at the age of 14. There he joined the CSC Fathers.

In 1932, he was sent to Paris to study theology. While there he began to organise JOC sections in a communist quarter of the city.

After ordination in 1936, he became a seminary teacher in Le Mans, where he also worked as a JOC chaplain.

When World War II broke out, he was interned as a German citizen before being sent back to the US after establishing his credibility with his knowledge of Notre Dame football.

There he founded a university Catholic Action Students group, a kind of University YCS, mostly with graduates.

Later in life he also founded a Third Agers movement for those who had retired.

In addition he founded Fides Publishers and he wrote a number of books promoting the jocist-inspired apostolate. Indeed, he called the JOC "a miracle of the 20th century."

"He also served as rector of Cavanaugh Hall and later of what is now Moreau Seminary.In his spare time, he also founded Fides Publishers, a company which made previously untranslated works of European theologians available to literate Catholic lay people.

"Long after reaching the age when many of his brother priests were dozing on the Corby Hall porch, Father Louie established South Bends Harvest House, a center devoted to the physical, spiritual, and cultural needs of Third Agers, and the Forever Learning Institute, an inexpensive continuing-education program in which he remained active until days before his death. Both projects became models for similar initiatives inPhoenix; Houston; Galveston,Texas; Wichita,Kan.; andCalifornia’s Coachella Valley.

"To be an apostle, he once said in a homily for Pentecost Sunday, you need not necessarily become a social worker, or a foreign missionary; you need not be a dynamic orator. You need merely to be keenly alive to the needs of your neighbor, the neighbor of your immediate environment," Fr Hesburgh wrote.