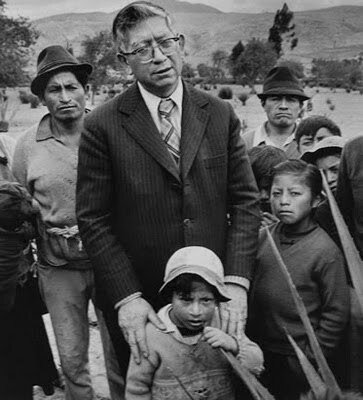 Ecuadorian Bishop Leonidas Proaño founded the JOC in Riobamba in 1954. Later he worked extensively with indigenous communities and was a Council Father at Vatican II.

Born in 1910, Leonidas Eduardo Proaño Villalba was an Ecuadorian priest and theologian. He served as the bishop of Riobamba from 1954 to 1985. He was a candidate for the Nobel Peace Prize and is considered one of the most important figures in Ecuadorian liberation theology.

Proaño was ordained as a priest in 1936 and soon became interested in the latest trends Catholic social doctrine.

He founded the Young Christian Workers (YCW- JOC) in the Ibarra diocese. He was named bishop of Riobamba in 1954.

He fought constantly to introduce social justice in relations with indigenous people and to promote indigenous access to public life and political power (he thus became known as "the bishop of the Indians"). He enthusiastically adopted the thesis of liberation theology. In 1960, he created the Escuelas Radiofónicas Populares, with a clear educational goal. In 1962, he created the Center of Studies and Social Action to aid the development of indigenous communities.

In 1973, he was accused of guerrilla warfare and had to stand trial in Rome, but he was cleared of all charges. In 1976, he was jailed during the dictatorship of Guillermo Rodríguez Lara. In 1985, he renounced the bishopric and was named president of the Pastoral Indígena.

His colleague in the Ecuadorian Bishops Conference and current archbishop of Cuenca, Monsignor Luis Alberto Luna Tobar, highlighted the work done by the "bishop of the poor" throughout his life.

"He is the greatest man in the whole history of the Church in Ecuador," he stated.