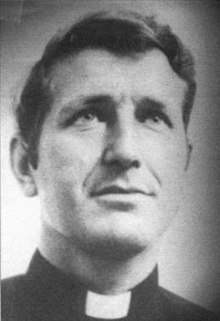 Carlos Mugica was an Argentinian Jesuit worker-priest, who was also a JEC chaplain. He was assassinated in 1974.

Argentinian priest Fr Carlos Mugica started to work with poor families in 1954 in the parish of Santa Rosa de Lima in Buenos Aires.

As well as working as a worker priest, he was a chaplain to the YCS at the National College in Buenos Aires and the University YCS at the Faculty of Medicine.

In 1964, the YCS started to grow in strength with the arrival of Carlos Gustavo Ramus, who became the president. It was at that time that Mario Firmenich, future leader of the militant Montoneros, also joined.

Mujica transmitted the thought of Pierre Teilhard de Chardin, the personalism of Emmanuel Mounier as well as the theology of Yves Congar and Michel Quoist.

He celebrated the funeral of Fernando Abal Medina, killed in 1970 by the police under the dictatorship, which led to his arrest for several days for "incitation to violence".

Faithful to his understanding of the Gospel, Mugica did not support armed struggle, a much debated subject during the Argentine Revolution from 1967-73. He shared this position with Fr Carbone, national chaplain of the YCS.

He was supported in this by Lucía Cullen, who disappeared a little before the coup d'état of 24 March 1976 ending the regime of Isabel Peron.