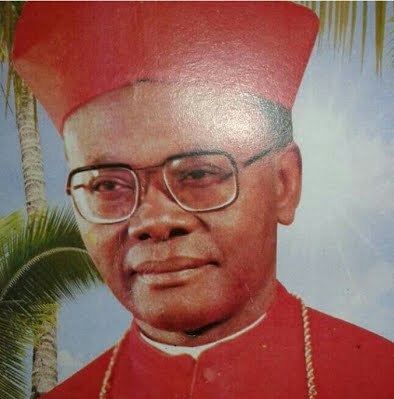 Cardinal Joseph Malula was a JOC and Ligue Nationale de Travailleurs Chrétiens chaplin in the former Belgian Congo. As a bishop he took part in Vatican II and participated in the drafting of Gaudium et Spes.

Born at Léopoldville (now Kinshasa) in the former Belgian Congo (new Democratic Republic of the Congo) on 12 December 1917, Joseph Malula was ordained to the priesthood on 9 June 1946.

He then resumed teaching at a local minor seminary and also served in several parishes, where he became a JOC chaplain and eventually a chaplain to the Ligue Nationale de Travailleurs Chrétiens (National Christian Workers League).

In 1958, he delivered a famous speech at a conference in Brussels entitled "L'âme noire face à l'Occident" (The Black Soul Facing the West), which was published in the Notes de Pastorale Ouvrière, the Belgian jocist chaplains' magazine, in February 1959.

In this he insisted on the equality of all humankind and looked forward to the end of colonialism.

On 18 July 1959, he was appointed Auxiliary Bishop of Léopoldville and Titular Bishop of Attanasus by Pope John XXIII.

As a bishop and archbishop, he attended all four sessions of Vatican II. He was also a member of the commission that drafted Gaudium et Spes.

He was appointed as archbishop of Léopoldville on 7 July 1964. In 1969, Pope Paul VI made him cardinal.

Prior to the Conclave that elected Pope John Paul II, he criticised the Vatican's pomp.

"All that imperial paraphernalia. All that isolation of the Pope. All that medieval remoteness and inheritance that makes Europeans think that the Church is only Western. All that tightness that makes them fail to understand that young countries like mine want something different. They want simplicity. They want Jesus Christ. All that, all that must change," he said.

He was also a pioneer of liturgical incultural, which led him into conflict with the Vatican.