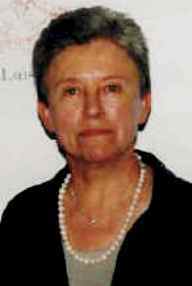 is a Uruguayan feminist theologian and photographer who has lived in Venezuela since 1969. A representative of Latin American ecofeminism, she was one of three Latin American women appointed by Pope Paul VI as observers at the Second Vatican Council.
Gladys Parentelli (Wikipedia)

Gladys Parentelli was born in her grandmother's house in Carmelo. In 1969 she went to Venezuela on a religious mission with the Movimiento Internacional de Juventudes Agrarias Católicas (MIJARC).

Career
Parentelli studied education, information science, group dynamics, feminist theology, and photography. She does portrait photography, and her studies have led her to ecofeminism. She is the founder and president of the Movimiento de la Juventud Agraria Católica Femenina. She is a member of several associations of women theologians and pastors in Latin America. She is the founder of the Red Latinoamericana de Teología y Espiritualidad Ecofeminista in Venezuela. She is the director of the Foro Permanente por la Equidad de Género and CISFEM. She is the Venezuelan head of Católicas por el Derecho a Decidir, an organization that teaches family planning to poor women. She teaches in this field and has written several essays and articles in specialized journals and in news media.

She is the National Coordinator of Documentation and Publications at the Red Universitaria Venezolana de Estudios de las Mujeres (REUVEM-Venezuela).[3]

Gladys Parentelli is a representative of Latin American ecofeminism. The central idea of ecofeminism is that the oppression of women and the destruction of the planet result from the same patriarchal system.[4]

In Latin America ecofeminism has been connected with feminist philosophy and liberation theology.

Gladys Parentelli, as a representative of Latin American ecofeminism, was one of three Latin American women appointed by Pope Paul VI as observers at the Second VaticanCouncil.

At the time, as president of the women's branch of the Movimiento Internacional de la Juventud Agrícola y Rural Católica (MIJARC), she thought:

As an auditor at the Second Vatican Council, she supported liberation theology, which appeared at the same time as the Council.
Gladys Parentelli (Wikipedia)