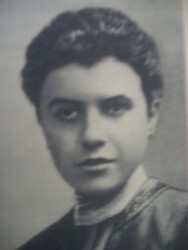 Pioneer of the Flemish Christian Workers Movement, who collaborated with Cardijn in the establishment of the JOCF/VKAJ.

Maria Gabriella Baers ( Antwerp , September 20, 1883 – Brussels , December 30, 1959 ) was a Belgian social worker , senator and the founder of the Christian Workers Women's Movement (KAV). She was one of the great figures of Christian feminism during the interwar period.


Contents
1 Lifecycle
2 Recognition
3 Literature
4 external links
Life course
Maria Baers came from a middle-class family. Her father was a merchant of colonial food products. She lost both her parents at an early age, so that at a young age she was responsible for the education of her younger sister Margriet and her two younger brothers Joris and Eduard (procurator des Konings in Antwerp during the Second World War [1] ). After secondary education at the Institute Onze-Lieve-Vrouw in Antwerp, she studied philosophy at the Institut Saint-Louis in Brussels. After her candidacy years, she went to the University of Friborg in Switzerland to study social sciencesto study.

In 1908 she started working as a social worker for the workers in Antwerp . She was active in the Women's Union Constance Teichmann , which was founded in 1910 by Marie-Elisabeth Belpaire . In 1911 she organized the very first Flemish Social Study Days for Women .

At the request of Cardinal Mercier , Baers came to Brussels in 1912 and, together with Victoire Cappe , founded the General Secretariat of the Christian Women's Trade Unions of Belgium , which in 1917 became the General Secretariat of the Christian Social Women's Work of Belgium . Baers became chairwoman of the Flemish section while Cappe led the French-speaking section. From this secretariat, the Kristelijke Arbeiders Vrouwenbeweging arose in 1920 , the emancipated movement for working-class women. Until 1951, Baers was chairwoman of the KAV.

During the First World War , social education for women was also started. In 1916, Baers started the first social courses with the help of Professor Victor Brants . In the years that followed, these courses were refined to culminate in the establishment of the Catholic Social Normal School for Women in Brussels in 1920, the very first social school in Belgium.

In 1921 she became Vice-President of the General Christian Trade Union . Baers paid particular attention to the upbringing of women, the working conditions of women, the appreciation of the housewife and public hygiene . She worked closely with the Algemeen Christelijk Arbeidsverbond , of which the KAV was a part, and with politicians such as Cyrille Van Overbergh , Prosper Poullet , Paul Tschoffen and Edmond Rubbens . In addition, from 1913 to 1922 she was secretary of the Association of Christene Glove Makers and from 1922 a member of the board of theNational Union of Christian Mutual Insurance . In 1919 she became a member of the High Council of Labor and in 1935 she became a member of the Commission for Women's Work, which was set up by the Ministry of Industry, Labor and Social Welfare. In 1946 she was co-founder of the High Council for the Family and became its vice-chairman until 1953.

Initially, Baers showed little interest in getting involved in politics and did not fight for the introduction of women's suffrage , although she was not opposed to it in principle. She limited herself to her involvement in the female Christian social movement, but eventually became convinced that political action was necessary to achieve her social goals. After the 1936 elections, Baers was co- opted into the Senate by the Catholic Union , making her the first female Catholic senator in Belgium. She sat there continuously until 1954 and from 1944 to 1954 she was secretary of the assembly. From 1945 she was also chairwoman of the senate committeePublic Health and Family and by submitting bills she was able to implement the ban on women's work in the mines and quarries and the protection of the title of social assistant . She also contributed to the improvement of the social and legal position of women.
Maria Baers (Wikipedia.nl) 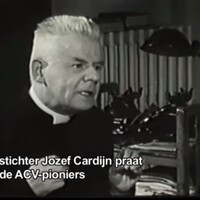