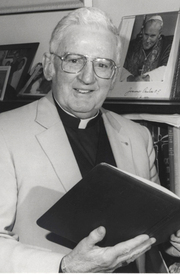 Archbishop James Gleeson of Adelaide, was a key actor in promoting the development of the Cardijn movements in Australia.

James William Gleeson was born in Balaklava, a town in the mid-north of South Australia, on 24 December, 1920.

He received his primary education at the state school at Bowillia, 30 km north of Balaklava. In 1932 he gained the Qualifying Certificate at the end of his primary education. He then continued at Bowillia school for two more years, assisting the sole teacher in tutoring the younger pupils and at the same time helping on the family farm, a property of 182 hectares devoted to mixed farming – crops, sheep, pigs and cows. The family really struggled financially.

In 1936 he resumed his education with the Sisters of St Joseph at Balaklava. He completed the requirements for the intermediate certificate (a three-year course) in one year and was then awarded a scholarship to Sacred Heart College.

He began his seminary studies at Corpus Christi College, Werribee, Victoria in 1938. He was ordained on 25 July 1945.

He was appointed as an assistant priest in the Cathedral parish in December 1945. In 1947 he went to the Mercy Teachers’ Training College in Melbourne for a course which required one year of academic work followed by a year of teaching experience before applying for registration.

He was appointed as an auxiliary bishop on 15 February 1957, the first local diocesan priest to become a bishop and was consecrated on 21 May 1957.

Pope Paul VI appointed him as Coadjutor Archbishop of Adelaide on 6 July, 1964 and he succeeded Archbishop Matthew Beovich on 1 May 1971.

He served in that role until 1985 when failing health forced him to resign.

The YCW and YCS

In 1959 Archbishop Beovich encouraged and assisted the Young Christian Workers (YCW) to purchase and renovate a house on Ayers Hill Road, Stirling, in the Adelaide Hills. The house, which cost £10,000, was to be a training centre for YCW leaders and the young people gave many hours of voluntary labour to put the property in order. They were impressed by the efforts of Bishop Gleeson who frequently on Mondays, the traditional clergy day off, assisted the project and even helped to dig the pit required for the septic tank. Archbishop Beovich officially opened the training centre in March1960.

The young people who frequented the Centre got to know Bishop Gleeson very well – even more so after the Second Vatican Council of 1962-1965. The YCW executive spent prime time with him, hearing his personal experiences as well as learning the outcomes the Council decisions.

Bishop Gleeson attended the First, Third and Fourth Sessions of the Council and played a very active role in promoting its teachings.

He was particularly interested in Gaudium et Spes, the Constitution on the Church in the Modern World and Apostolicam Actuositatem, the Decree on the Apostolate of the Laity.