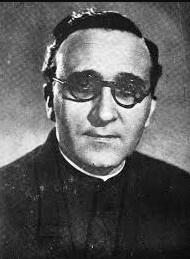 Founder of the "Federació de Joves Cristians de Catalunya" (FJCC) or 'Young Christians of Catalonia', precursor of the Catalonian JOC. Later an expert in the Preparatory Commission on Lay Apostolate at Vatic an II.

Born in Vilafranca, Alt Penedès in 1894, Fr Albert Marrugat studied at the Barcelona seminary and at the University of Barcelona. He completed a doctorate in theology (1917) and in philosophy (1930).

In 1931, he founded the "Federació de Joves Cristians de Catalunya" (FJCC) or 'Young Christians of Catalonia', known as the 'fejocistas' in 1931 and he remained counselor (or chaplain) until 1936.

This organisation was largely modeled on the JOC although it was not restricted to young workers.

He took part in the first international meeting of JOC chaplains in 1931.

In 1935, he brought 200 young people to Brussels to take part in the First International Congress.

In 1936, he was forced to flee Barcelona because of the Civil War, taking refuge in Rome and in France.

Later, he returned to Pamplona where, despite his opposition to the Republican forces, he was treated with suspicion.

Once cleared, however, he became a close collaborator of Cardinal Goma, Archbishop of Toledo, and Primate of Spain.

Cardijn also had a reserved attitude towards him during this period but because of his support for the Franco regime.

In 1945, Archbishop Enrique Pla y Deniel appointed him as secretary of the central leadership of the National Board of Catholic Action Spanish.

During Vatican II, he was appointed an expert in the Preparatory Commission on Lay Apostolate.

He also contributed to the early drafts of Gaudium et spes.

However, in 1963, he resigned all his responsibilities and returned to Barcelona.

He wrote several books on youth work and on Catholic Action.

He was also an expert on the Jesuit theologian, Suarez.

He died at Cornellà de Llobregat, Bajo Llobregat in 1974.