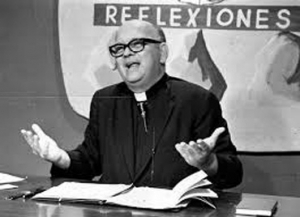 Jesuit Fernando de Arango Álvarez was a Cuban JOC chaplain, who was expelled from Cuba by the Castro government and later re-organised the JOC in the Dominican Republic.

Fernando de Arango Álvarez was born on February 20, 1924 in Havana, Cuba, studied at the Colegio Belén, from a very young age he felt a religious vocation, entered the seminary in 1941 and was ordained a priest in 1954.

For some time he served as an advisor to the Cuban JOC, especially in the last years of the Fulgencio Batista dictatorship and the first years of the Fidel Castro government, where the JOC played an important role in defense of rights. of young workers and the Cuban people in general.

Father Fernando de Arango was expelled from Cuba along with 125 other religious, both priests and nuns, among them Bishop Monsignor Eduardo Boza Masvidal, they were deported to Spain, Arango moved to Venezuela and in mid-1962 he settled in the Dominican Republic.

Arango joined other Jesuits who were working in the social area, including Father Manuel González Quevedo with special veneration, and some younger ones for that time such as parents Francisco Guzmán, José Arnaiz, Benavides, José Llorente and others , who carried out a task of identification with the Dominican working class, both in the countryside and in the city, especially in the area of ​​training, action and organization.

The first great task of Father Fernando de Arango in our country was to reorganize in 1962 the Young Christian Workers (JOC), which had existed in previous years, limited in some parishes of the capital, suspended during the last years of the dictatorship of Trujillo after the deportations of the last advisers, parents Manuel González Quevedo and Marcial Silva.
...
This is a way to remember Father Arango, who passed away on May 3, 1988, in Santo Domingo, and to thank him for all he did for the Dominican workers, especially for the youth.