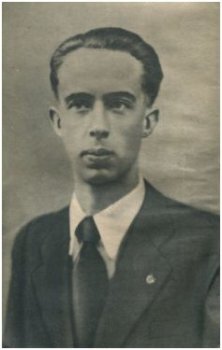 French JOC leader and member of the Resistance during World War II.

Born at Villeurbanne (Rhône) on on 7 August 1916 and executed, summarily in Lyon (Rhône) on 27 July 1944, Francis Chirat worked as an office boy. He became president of the JOC section of Villeurbanne and later departmental secretary for the Popular Family Movement in Lyon; he was a distributor of Témoignage Chrétien (Christian Testimony) newspaper (1943) as well as an animator for groups of young Christian resisters in the French South Zone (1944).

The eldest of three children and son of a silk worker, Francis Chirat attended the parish school of Villeurbanne and started work as an errand boy for the Crédit Lyonnais bank at the age of thirteen. He joined the local JOC section, eventually becoming its secretary, then president at the age of seventeen. In 1934 he became departmental secretary for the Lyons regional JOC. He also belonged to the CFTC (Christian Trade Union) and supported the 1936 general strikers. In 1937, he led 900 young people to Paris to celebrate the 10th anniversary of the French JOC. Then forced to take a long rest, he read a great deal ranging from the Bible to Karl Marx and Bukharin.

He did his military service in 1938-1939. When the “Phony war” began, he worked at the cavalry fodder park in Lyon, before being sent into combat in May 1940. After demobilisation, he returned to his job at the park as secretary and continued his activities with the JOC. His projects included the establishment of a branch of the movement for former members as well as organising contact with French prisoners of war. He organized the “Press and Propaganda” activities for the 15th anniversary regional congress of the JOC in June 1942. He also wrote articles for the JOC magazine, Jeunesse Ouvrière and joined the Cahiers de Notre Jeunesse team of the French Catholic Youth Association ( ACJF).

After the German occupiers rounded up 150 residents of Villeurbanne on 1 March, 1943, he created a mutual aid committee to demand their release and assist the families, with the help of the young president of the JOCF in Villeurbanne, Andrée Brevet. Shortly after, he became regional and fulltime secretary for the Popular Families' Movement (MPF) in Lyon. He provided support to young workers drafted for the Compulsory Labor Service (STO) in Germany and helped resisters to hide, providing them with false papers.

He then transformed his office on rue Salomon-Reinach into a center for the distribution of the underground paper, Témoignage Chrétien, among local working class people, distributing three thousand magazines and ten thousand letters for each edition. In close contact with those responsible for the paper, he asked them to write articles that were more easy to read for young workers. Despite periods of physical exhaustion which forced him to rest in the countryside, he remained very active and attentive to everyone. Living out the Jocist spirituality of giving in the name of Christ, he overcame the emotional loneliness from which he suffered after several disappointments.

The two young men became close friends. Chirat assisted Dru in the creation and animation of the Christian Coordination and Action Committee (CCAC) which, under the chairmanship of trade unionist Maurice Guérin, was working to prepare for liberation and the future by ensuring the presence of young resistant Christians within the broader republican movement. Francis Chirat also represented the “Jeunes chrétiens combatants” (Young Christian Fighters) within the United Forces of Patriotic Youth (FUJP) of the Southern Zone. As part of an underground political training course, he explained Marxist concepts to the group of young people from Lyon led by the young philosopher and resister, Joseph Hours, who became a founder of the Popular Republican Movement (MRP), a major post-war Christian democratic political party.

After taking part in aid work during the bombardment of Lyon on 26 May 26, 1944, he resumed his travels. He travelled to Paris with Gilbert Dru at the beginning of July, then in Marseilles from 14-16 July.

On the evening of the 17 July, the Gestapo raided the Lyon premises which had been lent to Guérin for a meeting of the CCAC which had just ended. Dru and Chirat were alone in possession of compromising documents. They were arrested and detained at Montluc prison, where they were also tortured.

On 27 July, one day after an attack on German troops, Chirat, Dru and three other prisoners were blamed for the attack and executed by machine gun. The killing took place at Place Bellecour, in front of the cafe where the attack occurred. Their bodies were left lying on the pavement for four hours as a warning to local residents. A monument now stands on the site.

Funerals for Chirat and Gilbert Dru were held in the parish of Notre Dame Saint Alban on 1 August. Chirat was posthumously awarded the Croix de Guerre with a silver star and the Resistance Medal.
CHIRAT Francis [CHIRAT Pierre, Antoine, Francis] (Maitron Fusillés)