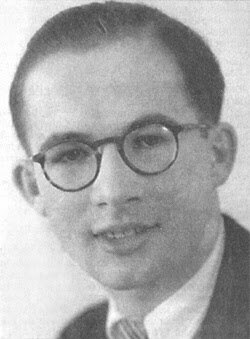 French JOC leader sent to Germany under the forced labour regime during World War II. Arrested for his role in organising workers and died in Mauthausen Concentration Camp.

Born on 6 December 1921 in Rennes, France, Marcel Callo became an apprentice printer at the age of 13.

Soon after he became a member of the Young Christian Workers movement after an inner struggle, because this meant he had to resign his position as scout troop leader, a role he had grown to love.

But he knew that he was being called to be an apostle in his workplace, and for this he needed a more solid Christian formation. And so, he spent his evenings studying Catholic social teaching and organizing meetings of the YCW, where he soon became a highly regarded leader

At the age of 20, he fell in love with Marguerite Derniaux.

"I am not one to amuse myself with the heart of a lady, since my love is pure and noble," he said.

"If I have waited until 20 years old to go out with a young lady, it is because I knew that I wanted to find real love. One must master his heart before he can give it to the one that is chosen for him by Christ."

It took him about one year to declare his love to Marguerite and an additional four months before they first kissed. After being engaged, they imposed a strict spiritual rule of life which included praying the same prayers and going to Mass and receiving the Eucharist as often as they could.

In 1943 his sister Madeleine was killed by a bomb falling on their house.

When the Germans occupied France, Marcel was ordered and deported to Zella-Mehlis, Germany to the S.T.O.,Service du Travail Obligatoire (Service of Obligatory Work).

“I am going there not as a worker but as a missionary,” he told his loved ones.

Despite the great pain that the prospect of parting with his dear Marguerite caused him, he found the courage to make the decision, for he knew that the forced labor centers in the Third Reich also needed his apostolic work. On bidding his fiancée good-bye at the Rennes railway station, he heard from her lips that he would die a martyr’s death.

“I could never deserve such an honor,” he replied in disbelief. But both felt they would never see each other again. Marguerite remained faithful to her fiancé. She continued to be active in the YCW. Later she would become a post office clerk. She died in 1997.

There he worked in a factory that produced bombs that would be used against his own countrymen. After three months or so of missing his family and missing Mass (there was no Catholic church in that town), Marcel became seriously depressed. He later found a room where Mass was offered on Sunday.

Marcel wrote to Marguerite: “One day Christ answered me. He told me I was not to give in to despair; that I should take care of my fellow workers—and I found joy again.” The barrack inmates soon became a closely-knit community. They ate their meager meals around a common table, prayed together, and participated in the Holy Mass every month. Once again Marcel became the leader, just as he had been at the YCW meetings in Rennes.

Cardinal Suhard, Archbishop of Paris even sent him a letter. “Thank you—he wrote—for the good that you are doing among your fellow workers. I bless your labors and pray for you.” The young men tried to conduct themselves prudently, so as not to draw attention to themselves. But you cannot hide your light under a bushel. On March 19, 1944, they arrested Marcel Callo for activities against the Third Reich. The Catholic witness of this frail young boy represented a danger to the powerful totalitarian regime.

With his morale and hope restored, he cared for his deported friends. He organized a group of Christian workers who did activities together like play sports or cards. He also organized a theatrical group. He galvanized his friends despite him suffering from painful boils, headaches and infected teeth. For his French friends, he arranged a Mass to be celebrated in their native tongue. Eventually, his religious activities attracted unwanted attention from the German officials. The Germans arrested Marcel on April 19, 1944 saying that, "Monsieur is too much of a Catholic."

The Germans interrogated Marcel. He admitted his Catholic activities and was imprisoned in Gotha. He secretly received the Eucharist while in prison and continued to pray and help his companions. He was considered dangerous to the Germans and was moved to a different prison at Mathausen. He suffered from various ailments such as bronchitis, malnutrition, dysentery, fever, swelling, and generalized weakness. He never complained. Despite his suffering, he encouraged his companions by saying, "It is in prayer that we find our strength."